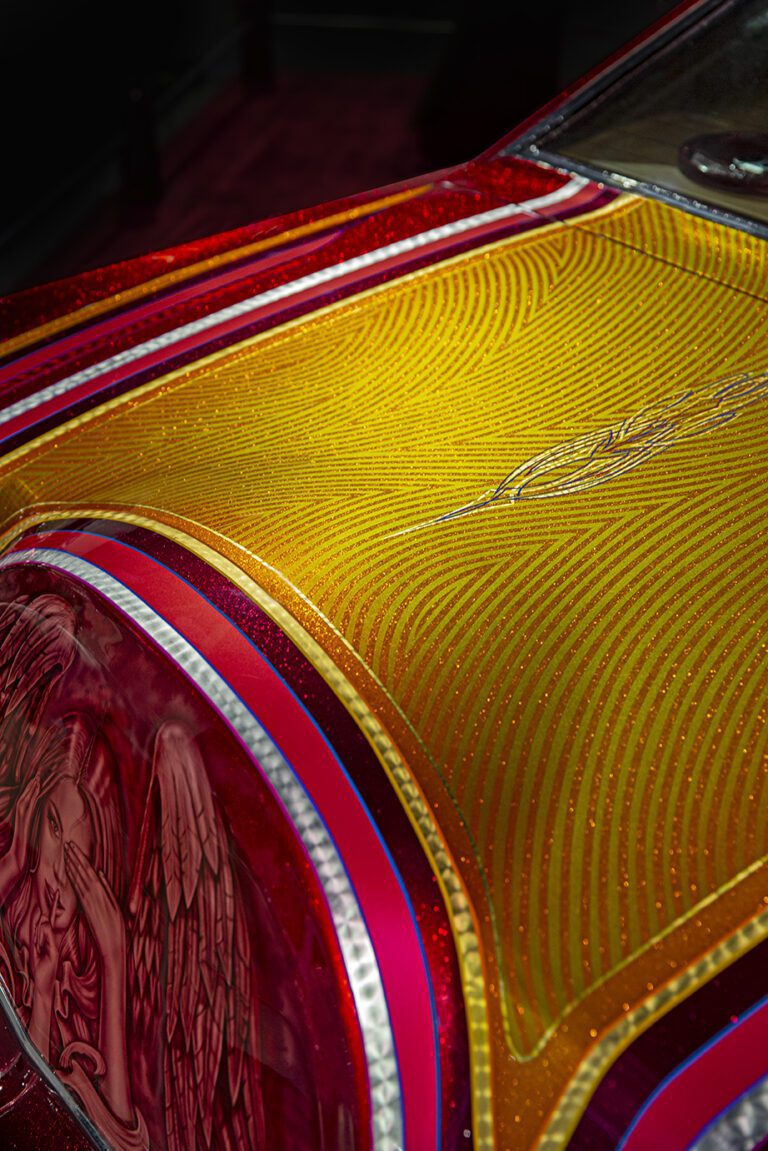 At 14 I was living the good life. Like most my age, I was playing video games, sports, and building model cars, but not today’s guest. At 14, George Ramirez bought his first Cadillac Deville and started the build – then again, he grew up surrounded by the adults from Stylistics CC who are now known as Originals CC. At the time one of them happened to be his Godfather Chino Gonzales, the owner of “Touch of Gold” which many of you will recognize as  “Doughboys” ’63 Impala from Boyz N The Hood.

It didn’t take long for the club to recognize George’s passion for lowriding. At one point they even decided that they wanted to give him a plaque, but that kind gesture was something that George didn’t take lightly. 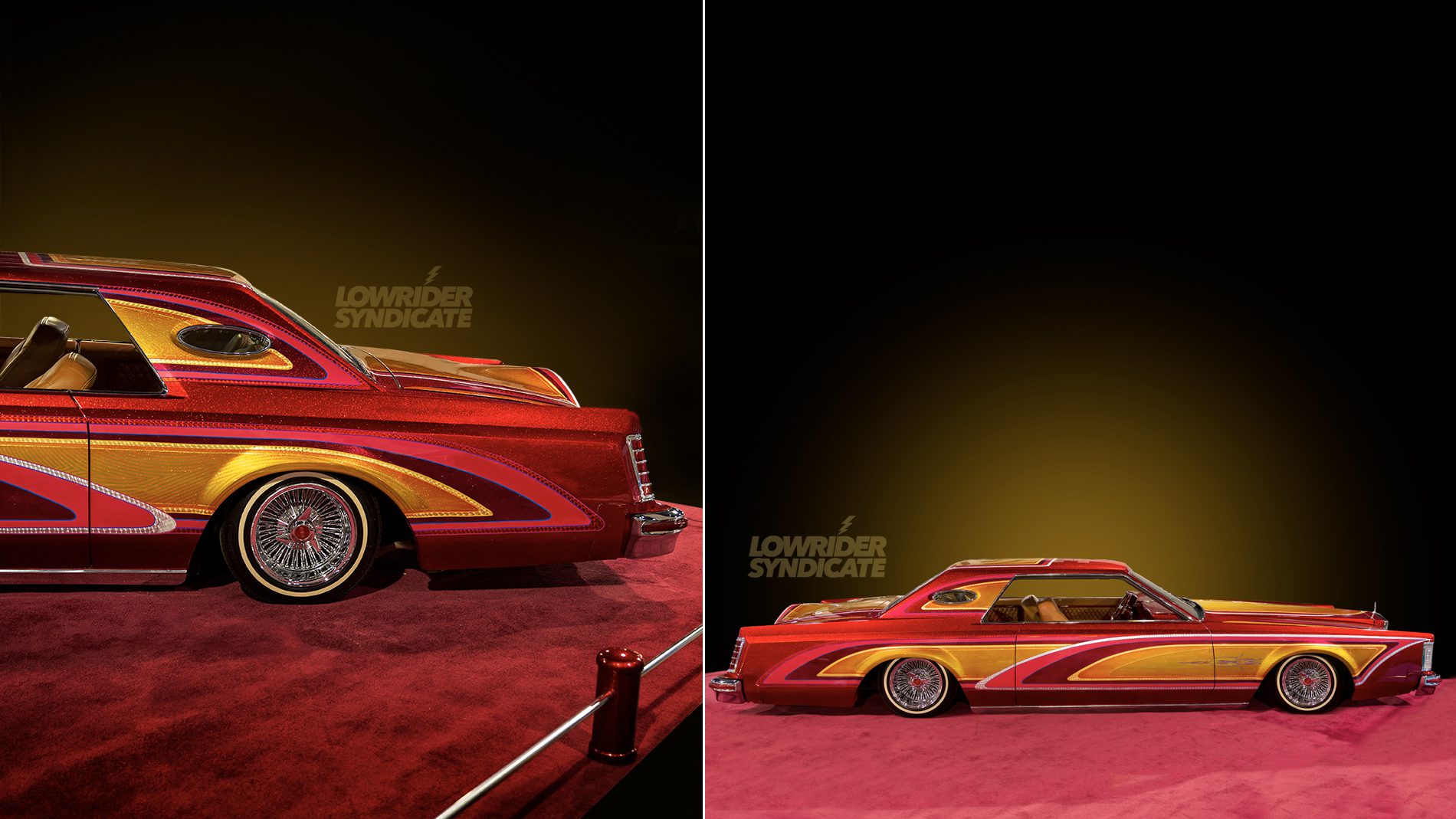 “I was unsure about the plaque. I had the car and I had the knowledge, but I still felt like a kid to them and felt in my heart I had a lot more to learn and prove” says George, who years later would wind up joining.

As the years past, George became notorious for building countless Cadillacs, and soon adopted the name, “Cadillac Scrappy” because he simply couldn’t get enough. He was buying so many Caddy’s he needed a three-car trailer so instead of selling any of his Cadillacs he did what any sane Cadillac lover would do – he sold his ’64 Impala.

“I was never in this game for the value of a car. I know I’m not gonna get my money back, I build these cars because I love doing it” says George. But don’t think that George is a one-trick pony. He was quick to explain that he still loves Chevy’s and is currently working on two 1956 Bel-airs, which he was sure to remind that he was going all out on these builds.

According to George, a stock-looking build is just not him and one look at his wife’s Lincoln serves as proof. This heavily modified 1978 Lincon Continental has extreme mods including shaved moldings, windows removed and sealed, four bucket seats, and a center console that travels all the way to the rear deck.

This thing is a work of art. 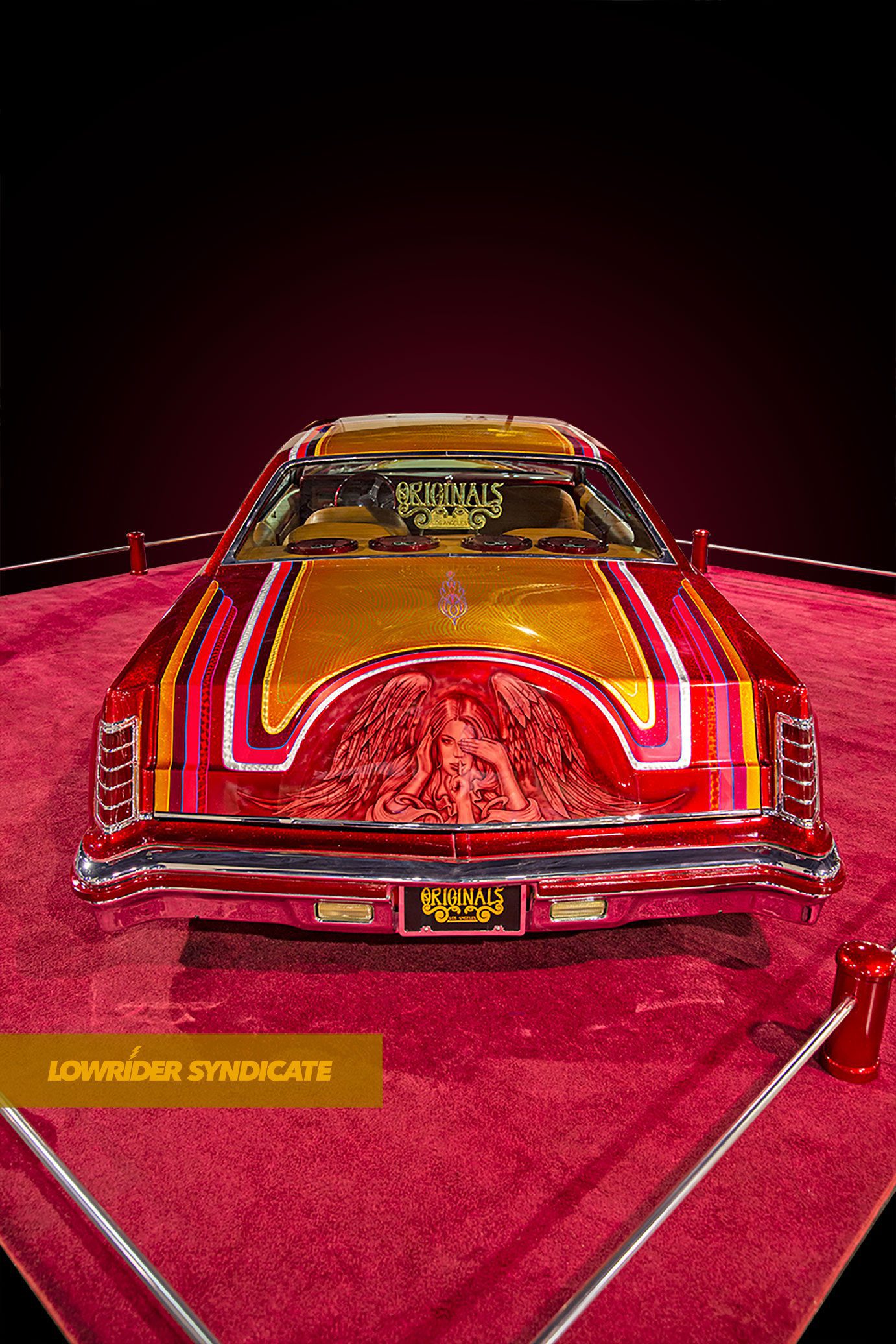 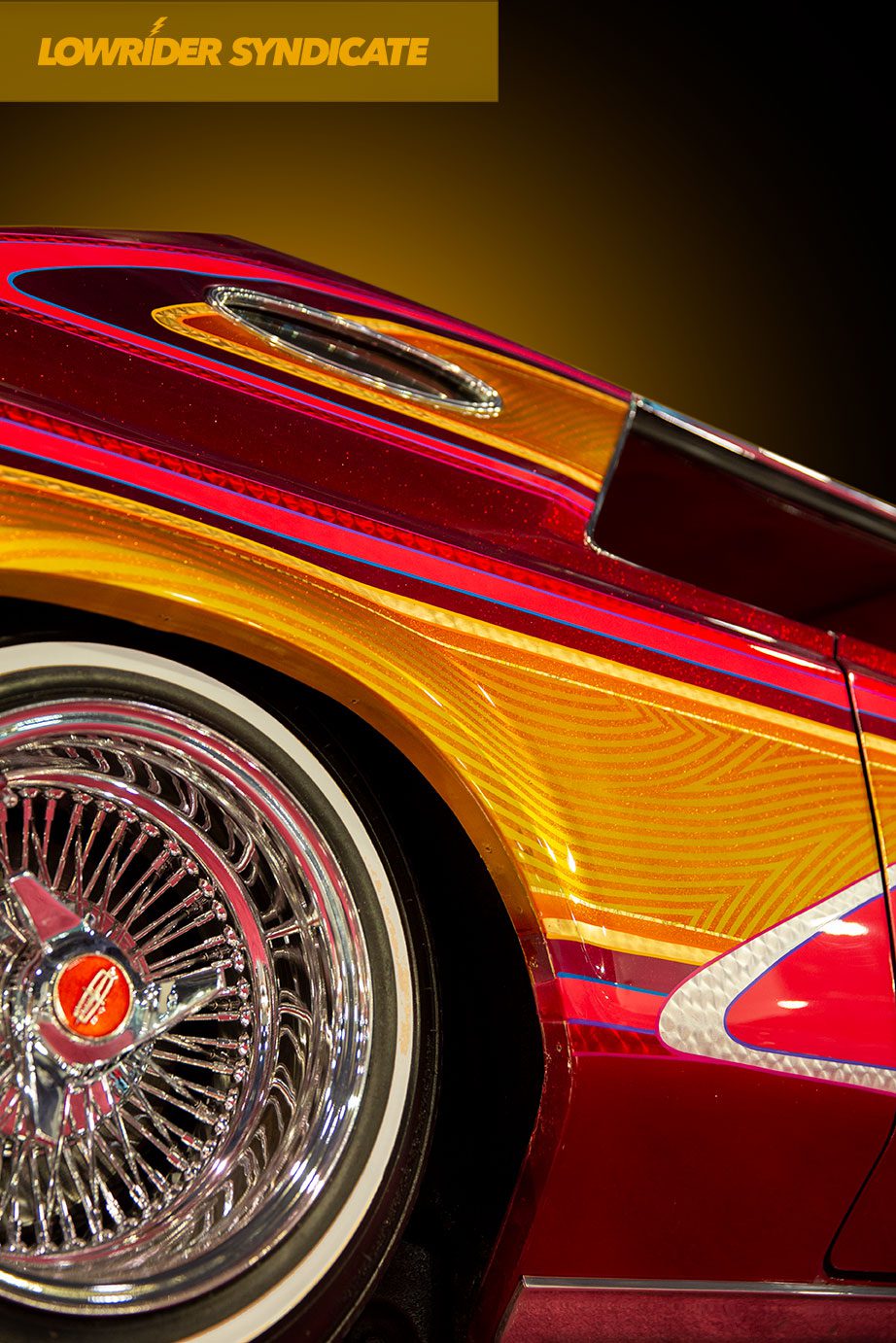 Get Lost in the Details

But here’s what’s crazy. It wasn’t too long ago that George had the Lincoln up for sale to fund his two ’56 Bel Air builds. But one night while having dinner at his mother-in-laws house he stared at the Lincoln and remembered why he bought it. “As a kid, I loved the lines of the Lincoln. I always loved the body shape and the way it looks when it lays out” says George. His memories of that night were vivid and he even remembered the date. “It was Sunday, May 9th, 2021. That was the night I convinced myself to not sell it and make it a Christmas present for my wife Janet.”

With the promise made, George wasted no time and that same night he started shaving and welding the moldings, pulled the bumpers, removed the mirrors, took out the parking lights and started the bodywork. The next day he brought the bumpers and moldings to Mike D in Santa Ana to lay some fresh chrome. Then two days later he went to the junkyard to find some seats and then dropped them off to his friend Mariano out in Norwalk for ulphostery. Aside from the upholstery, George did all the work on the interior  including the hydraulics and sound system.

For the sounds, George went with four 6×9 JBLs on the rear deck, an Alpine stereo and equalizer, 6.5-inch JBLs in the doors, two 10-inch Hifonics subs, and a 5 channel Hifonics amp. For the suspension, George put 2 pumps, 4 dumps, 4 batteries, and 8-inch cylinders in the front with 10-inch cylinders in the rear. For the wheels, George went with 14x7s to fill out the bigger wheel wells. 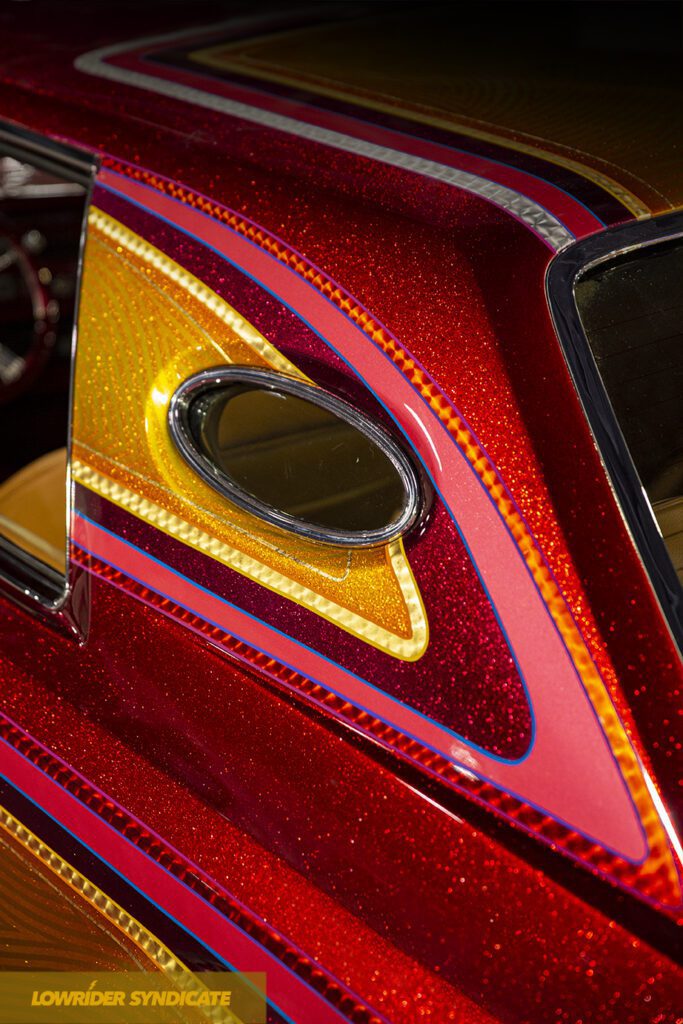 Opera windows | One of the design cues that dominated the 70’s and 80’s. This window was often found on highline American Cars 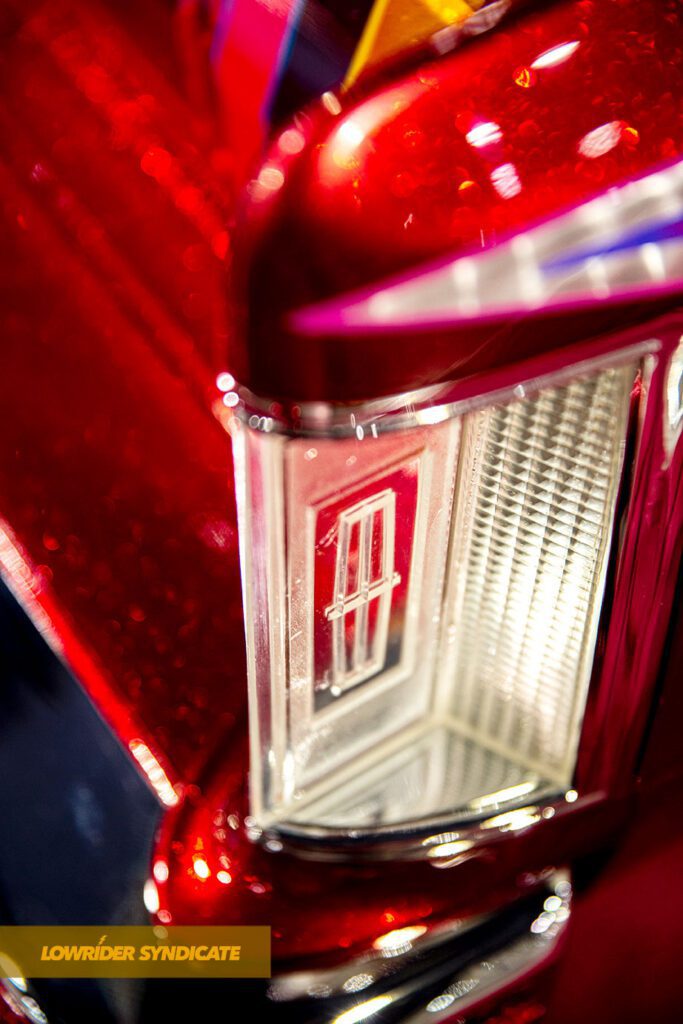 The details on the turn light are incredible as well.

Since George was already set on the name, “Class Act” he wanted the Lincoln to embody the paint styles from the late 70’s and early 80’s so he doused the Lincoln with crazy patterns, and then flooded it heavy flake and a whole lotta funk. Funny to think that at one point George thought he screwed up the paint job. George admits that while he’s been painting for over 30 years, he isn’t all too familiar with laying down candy paint. “I remember going inside the house to tell my wife that the Lincoln might come out really bad,” says George. “I remember laying the final coat thinking this doesn’t look right.” But take a close look at the car and he was dead wrong. The paint job came out immaculate and includes a flood of patterns and murals thanks to his nephew who helped spend countless hours banging out the project.

But get this. Ya ready? All that took place in the span of just four months. Yes. F-O-U-R MONTHS, and just in time for The Takeover show in September 2021.

But it gets better. This was all accomplished in the convenience of  George’s backyard.

This is also nothing new for him, as the Lincoln adds to an already long list of custom lowriders he’s built – many of which have graced the covers of Lowrider Magazine, and the most recent one being his 1982 Cadillac Brougham “The Seducer.”

This Lincoln was a reminder to George that everything doesn’t have to be “done up” to be considered a dope car. Unlike his other builds, this one has no fiberglass trunk, chrome suspension, or dressed-up motor and he plans to keep it that way. As many in the lowrider scene have come to find out, their cars, this one included, are no strangers to making the trek from the high-desert to Los Angeles.

With over 30 years in the lowriding game, George spoke briefly about the current lowrider scene. He says he loves the direction the lowrider culture is going and has no doubt that it’s only going to get bigger and better.  He admires the show-quality hoppers with painted bellies and chrome undies and says, “You didn’t see that back in the day, and it’s good to see and nice of them to share because the culture doesn’t grow by being selfish.”

In closing, George would like to thank Chino Gonzales, Joe Ray (Lowrider Magazine), Ralph Fuentes (Homies Hydraulics) and Saul Vargas (Lowrider Today). “I can’t thank these guys enough for mentoring me when I was new to the scene. Of course, I have to thank my wife for her constant support over the years.” 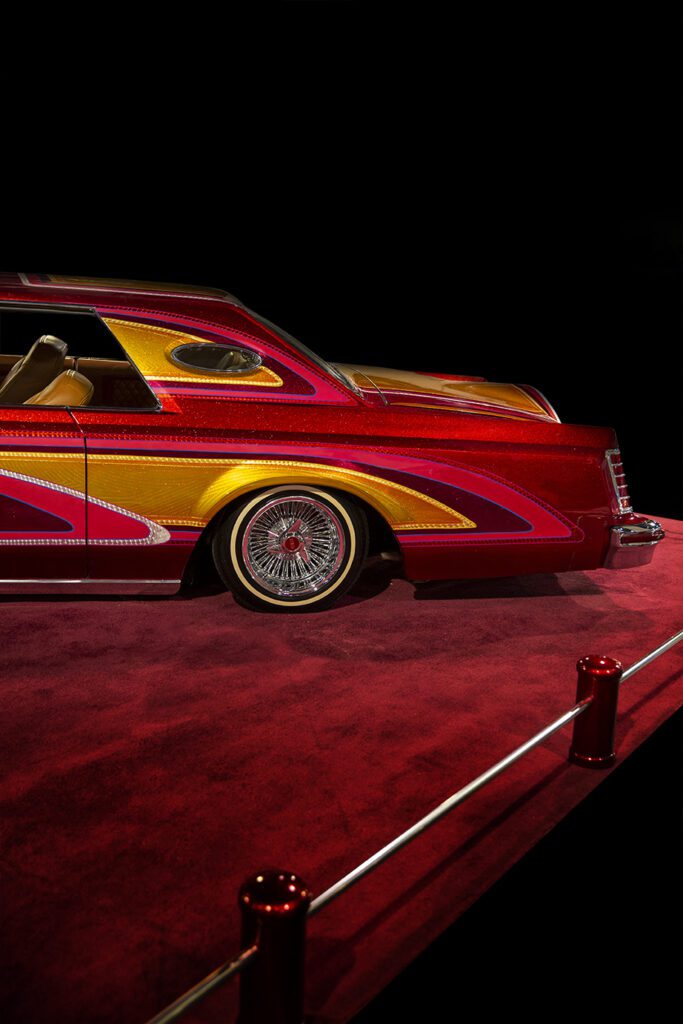