The First Lowrider in Siberia

Through rain, snow, and mud, this '75 Caprice redefines what it means to a "solo" rider. 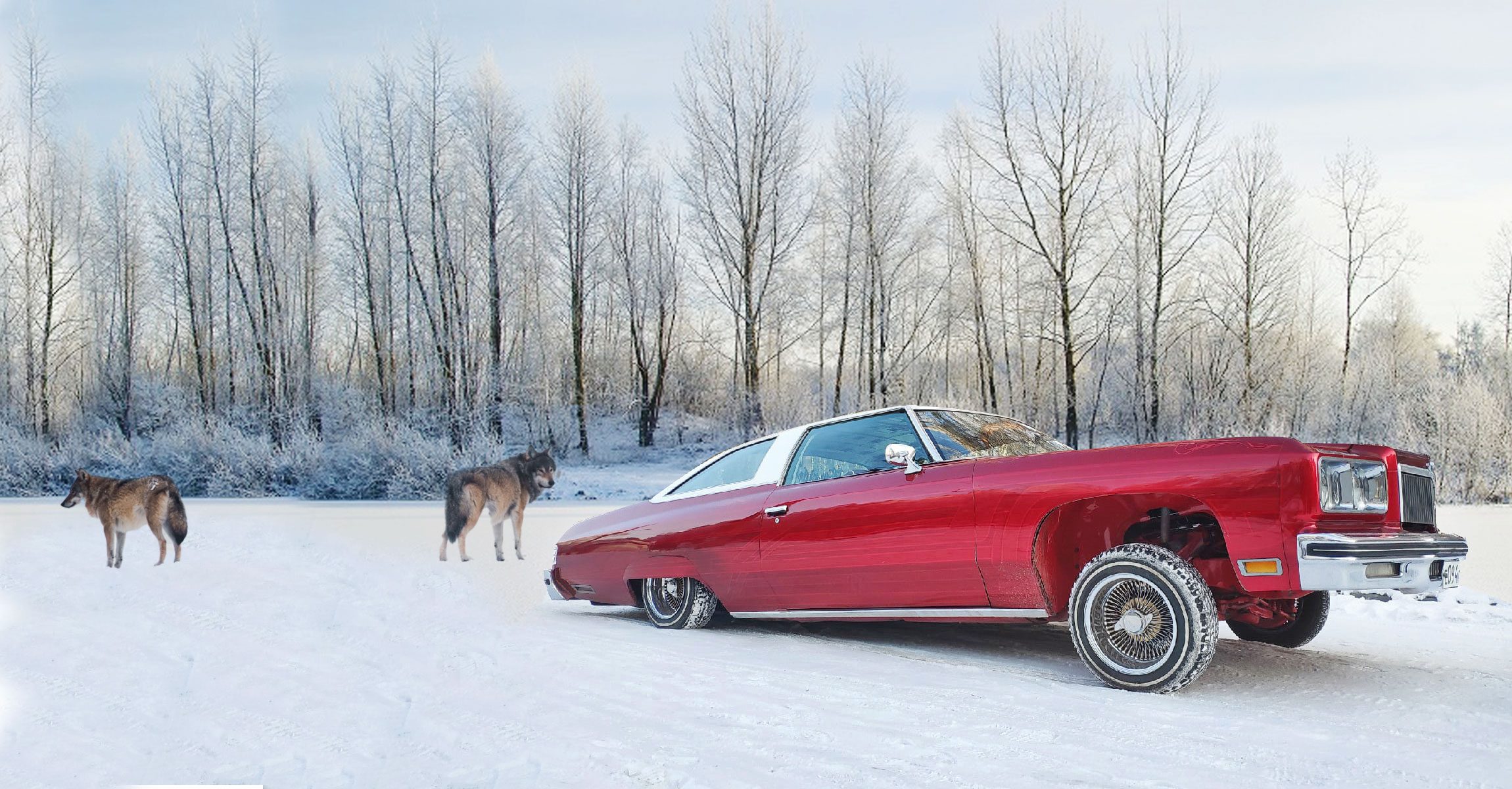 As the first and only lowrider in Siberia, Anatoliy redefines what it means to be a “solo rider”

In most parts of the world, gloomy skies will hurt the attendance of a show or cruise. Rain, on the other hand, will destroy all chances of anyone attending. It’s also understandable. No one likes having to detail their rides after driving through the rain but when it comes to tattoo artist Anatoliy Vladmirovich, he really has no choice.

Anatoliy’s passion for lowriding can’t be restrained, and when you consider he lives just about dab smack in the center of Siberia, it means a whole lot. With long winters and short summers, Anatoliy is taking lowriding to a whole other extreme as his 1975 Chevrolet Caprice becomes the first lowrider in Siberia – and to be honest, that’s a pretty big deal for both Anatoliy and the culture of lowriding. 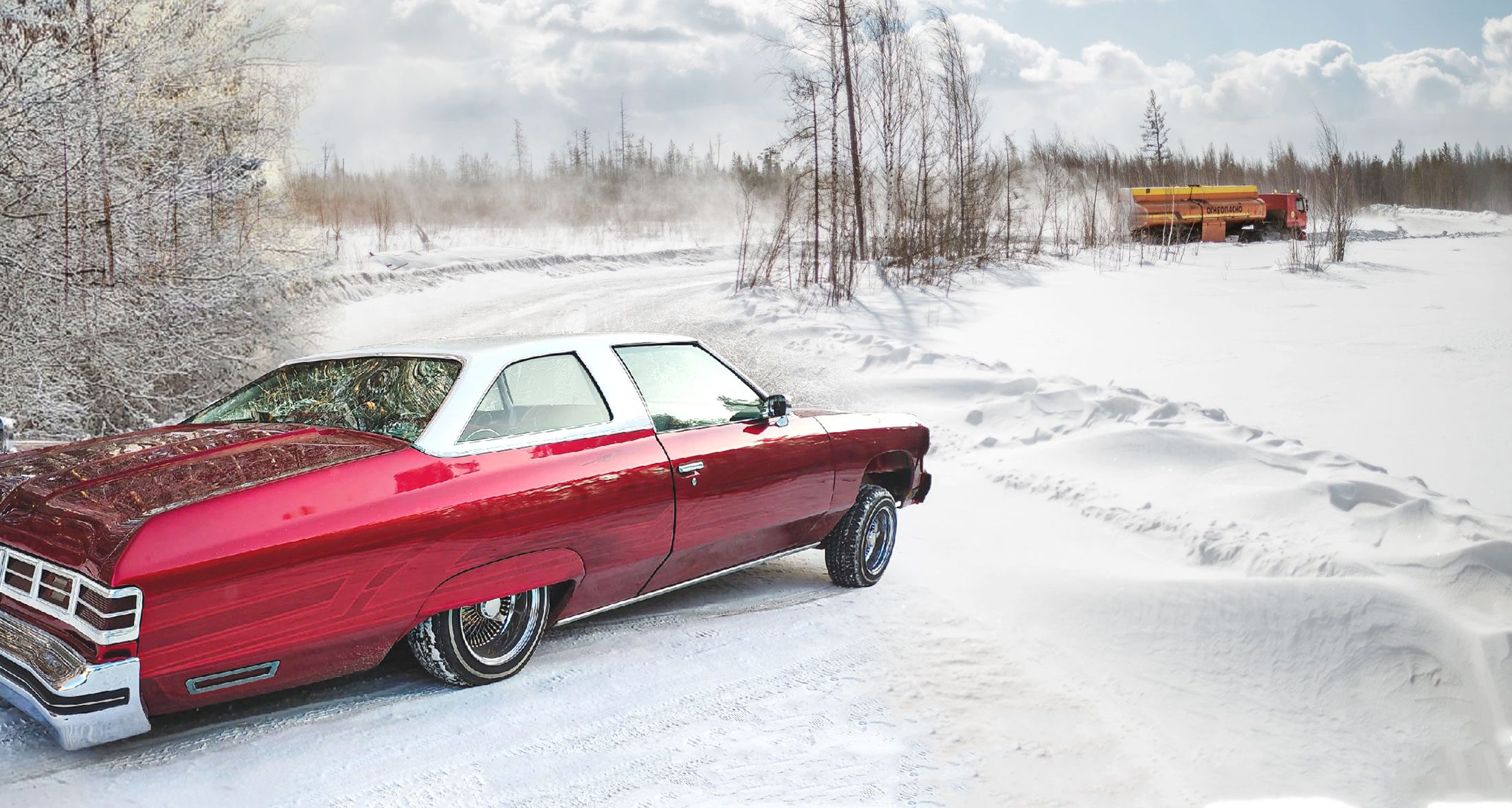 A view like this are something to cherish, just don’t know how long I’d last in this environment.

His interest in lowriding started in 1997, as a fan of West Coast Culture, Anatoliy consumed the lifestyle. Ironically enough, it was the movie “Don’t Be a Menace to South Central While Drinking Your Juice in the Hood” that sparked his love affair with lowriding. “After seeing OG Grandma three-wheeling in the ’64 Impala I was hooked,” says Anatoliy. “I loved the idea of being able to do this for myself and my curiosity with hydraulics became greater after after studying at a technical college for tractor drivers. It was there  I took a class on the topic of hydraulics and I loved it. At that point I knew one day I had to build my own.” 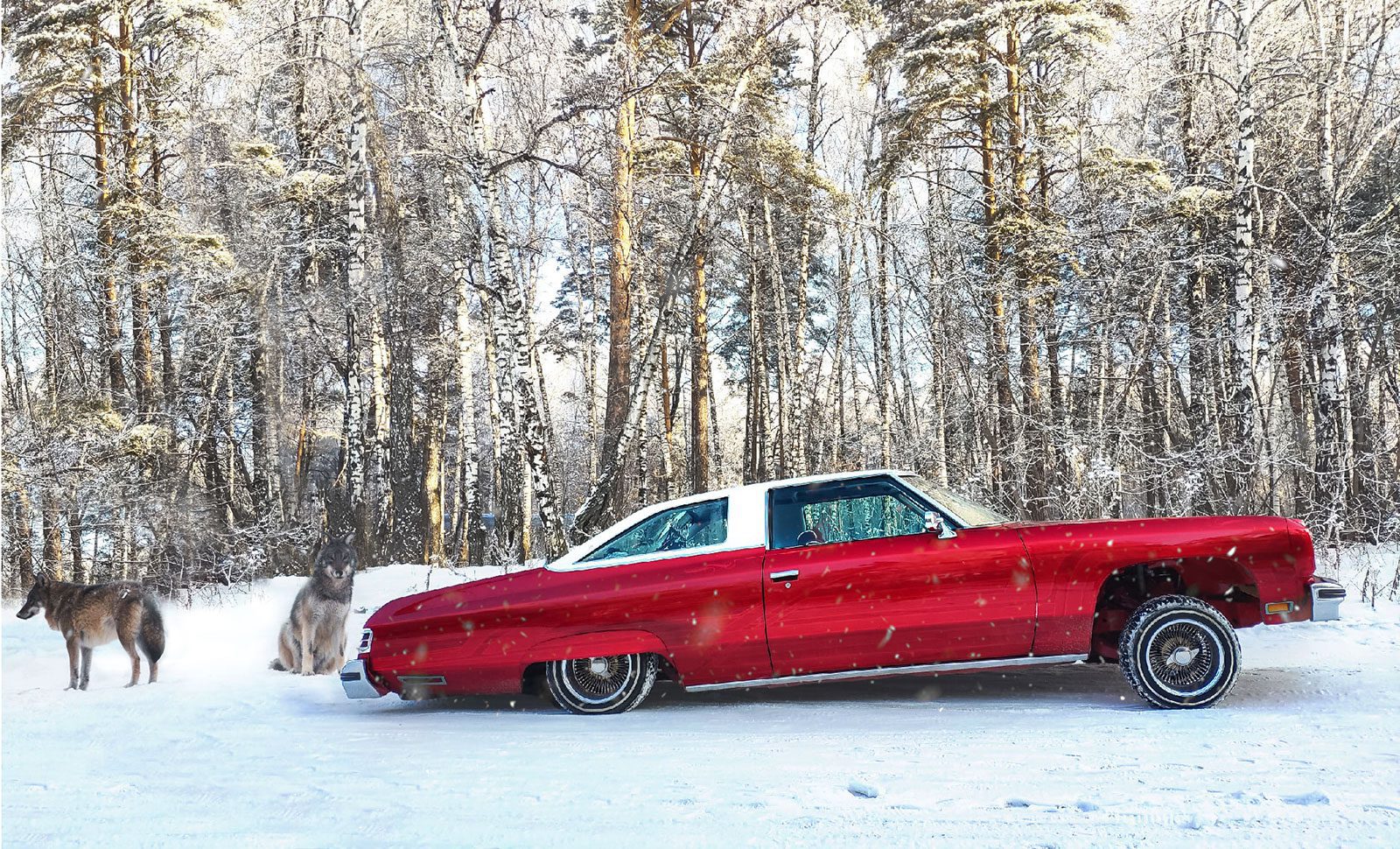 He found the car on an auction site back in 2013, paying 700,000 rubles – a lot of money when you consider the current average Russian salary is 35,000 rubles). The 1975 Chevrolet Caprice was located in Canada so he had his people in St. Petersberg bring the car back by ferryboat, and then sent an auto transport to pick it up and bring it back to Novosibirsk.

All the parts were purchased on eBay, and it’s interesting to note how much more he has to pay. Take for example the weather stripping for the trunk. The weatherstrip cost him 700 rubles, but paid an additional 3,500 rubles  for delivery and insurance! 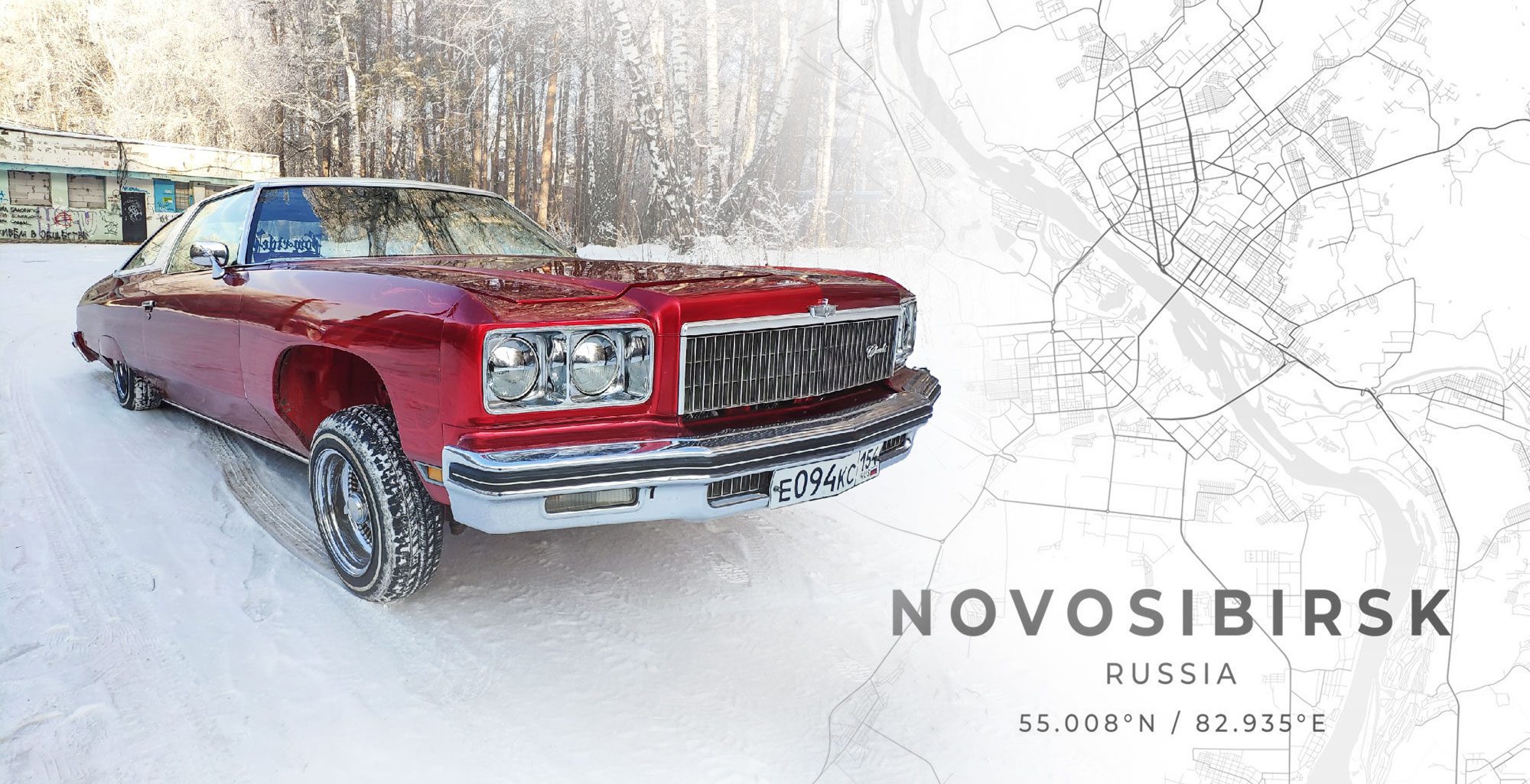 Anatoly lives in Novosibirsk City which is located near the center of Siberia. 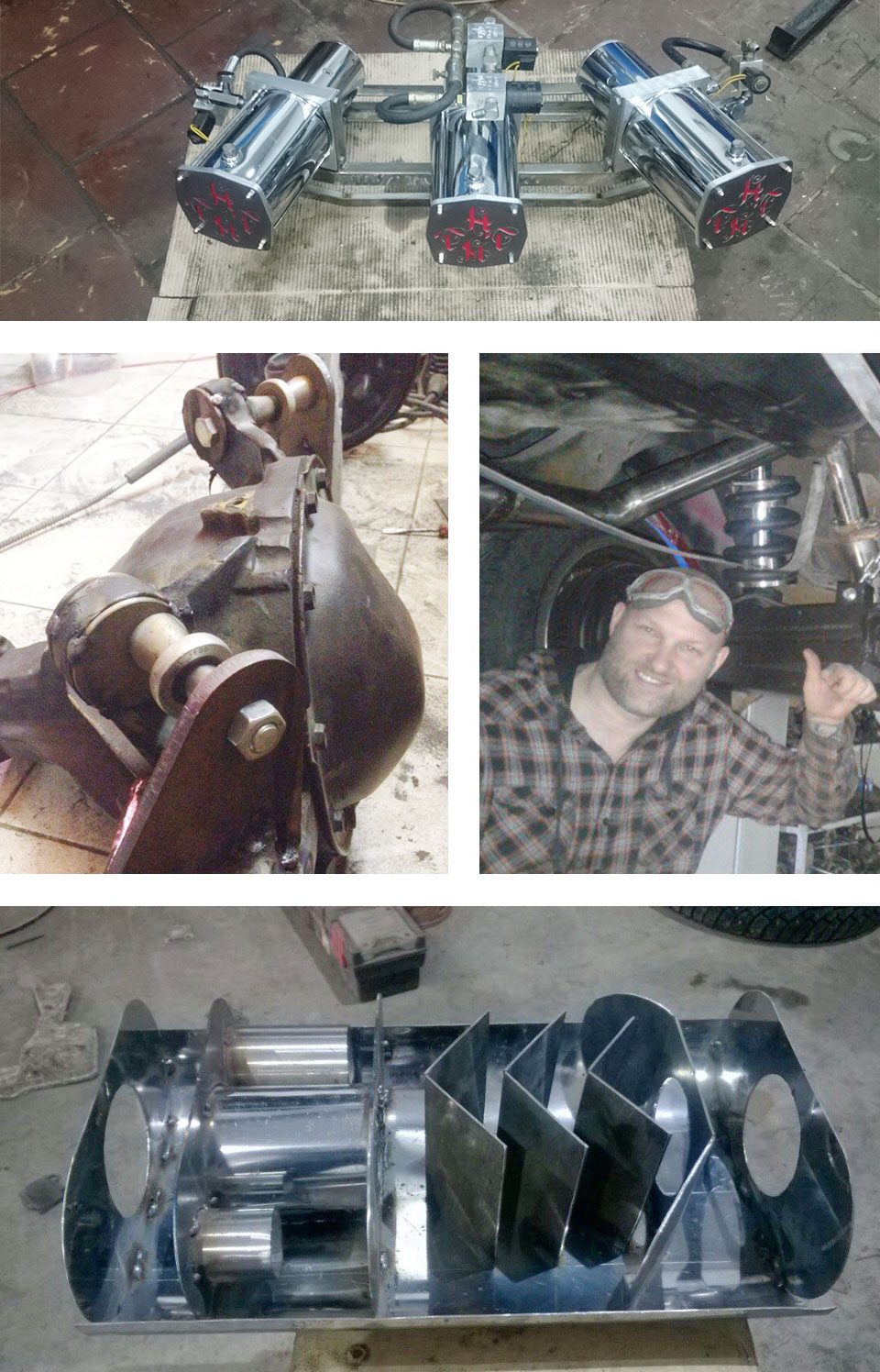 “After building this lowrider, I realized what people meant when they say, ‘A lowrider is never done.’ It’s true. It’s a custom build and there will always be something to do” says Anatoliy. “I live in Siberia where the summer is short and the winters are long so that leaves me plenty of time to work on my lowrider in the garage.”

To gather ideas, Anatoliy looks through Pinterest and the pages of Lowrider Magazine and says, “I am the first person in Siberia to own a lowrider. I spent much time taking this car apart it feels like a big LEGO, and it even got to the point my wife couldn’t stand it so she left me, but all I have to say is ‘There are plenty of women, but only my Caprice captures my heart.”

The Growth of Lowriding in Russia

With the very first lowrider to skate ice in Siberia, Anatoliy wants the scene to grow and is excited about the potential. He says, “I would like the lowrider culture to grow here in Siberia! Currently, there are only 10 real hydraulic projects here in Russia and we all know each other. Most of them have hydraulics on their Volga, but I understand. Not everyone can afford to start with a car like mine and the parts to make it happen are not cheap because we are in Siberia.”

Along with friends, Anatoliy is looking to spread the interest of lowrider culture and is organizing a festival for custom cars in their area. The event will be called @Hammerfest and it will be their first attempt to introduce the world of lowriding to Russia.

Would You Sell Your Heart?

“Lowriding has become a way of life for me and there are people getting serious about it. Some bloggers from Moscow recently offered me 3 million Rubles (which loosely translates to 40K) for my car, but I always think, ‘How can I sell my heart?'”

The Caprice has become more than just a car. It’s a lifestyle he’s captivated by, and the memories and friendships the car has created are irreplaceable. When asked about the response to his car in Siberia, he says “People have never seen anything like it in real life. They have seen lowriders in movies or the internet, and it’s hard to ignore my lowrider since it’s the only one here. The police on the other hand love it. They pull me over and it’s the same routine where they say, ‘Anatoliy Vladimorovich, Can I have your documents and what kind of car is it?'”

He goes on to explain that the police don’t even look at his documents and usually walk around his car admiring it. “My mechanic wonders why I have so much chrome, people are amazed by candy paint and pin striping because it’s not seen here, and I get many questions. Honestly, I am tired of answering questions repeatedly because I get it so much. They ask things like, ‘Why is there chrome under the hood? How loud is it? What is it called? How much does it eat.’ To be honest, so many people ask me to jump it up. that I want to sometimes tell them to go jump themselves!” 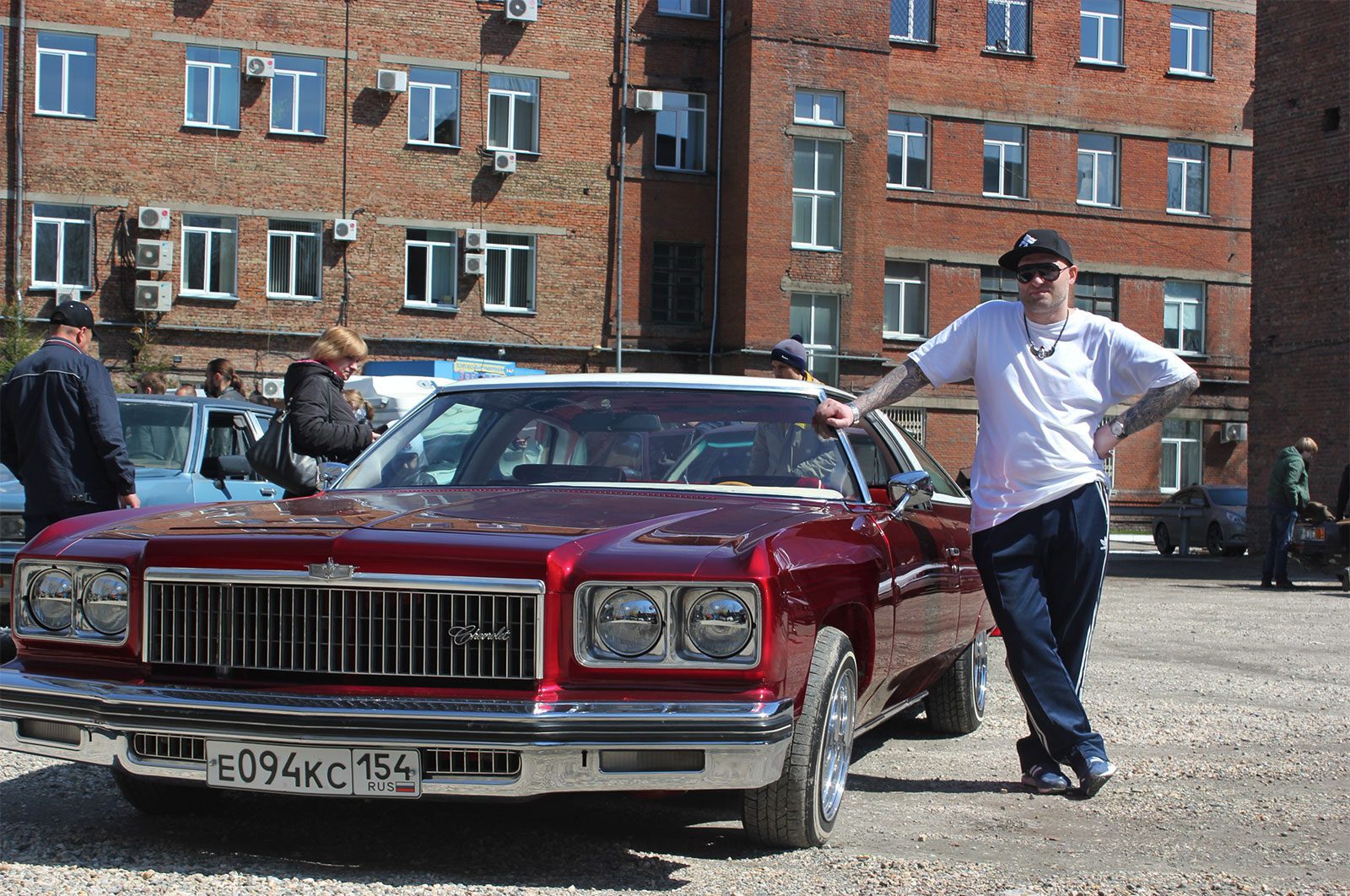 Would You Sell Your Heart?

With future plans to get more involved in lowriding, Anatoliy had plans to attend the Super Show and visit Los Angeles in 2020, but travel restrictions due to Covid put a damper on his plans. In the meantime, he’s got plans for so much more and among them is to continue showing the people of Siberia what lowriding is all about.