With bidding at $88,000 and just moments from being sold at Mecum Auctions, something unexpected happened, and it changed the course of not only this bubble top but the lady lowrider that now owns it.

"No woman should ever feel intimidated in the lowriding scene because there is nothing stronger than a positive mindset. Besides, what is there to be ashamed of? Nothing. So just go for it."

You tend to appreciate things more when you work for them – something most of us don’t realize till later. Especially currently, where social media has folks acting a fool and smashing their windshields or burning their rides in a field, all in the name of “gaining more followers.”

On the flip side, you’ve got the enlightened ones. These are the youngsters with old souls—the ones who stand out and practice being in the moment and have gratitude. Take our friend, Angie Robles; she’s one of those select few. Growing up in South Central LA, she had to grow up fast and learn quickly. She navigated the streets with a clear path to stay out of trouble, and thanks to her dad, John, she was able to understand that hard work and consistency would pay off – a lesson she learned as she watched her father build lowriders from the ground up. 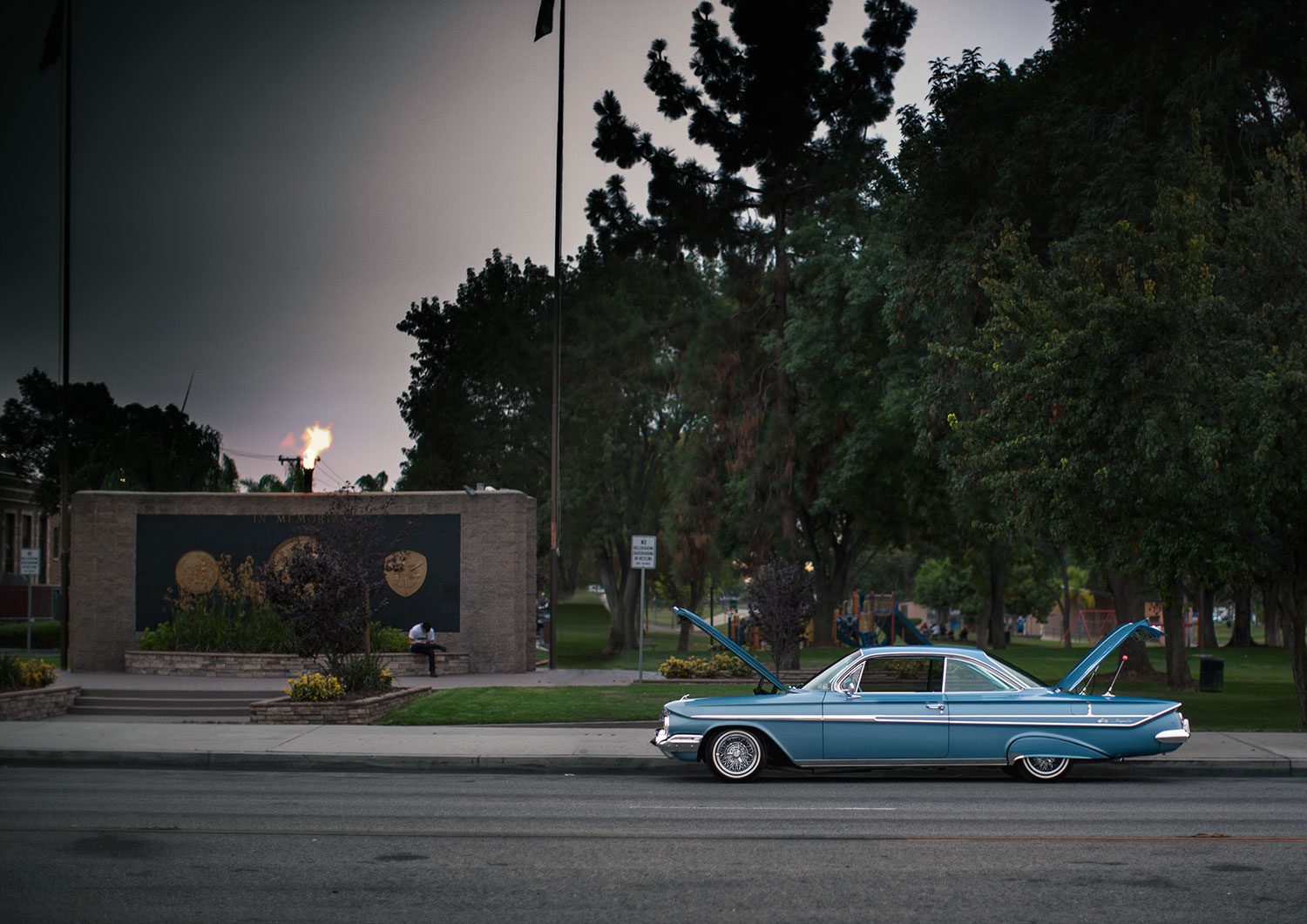 At first, Angie had no interest in cars despite watching her dad tinker with his ’64 Impala. That all changed when her dad brought home a rusted and primered 1961 Impala bubble top. “You bought this?” was the first question she asked her father. She was confused – and a bit baffled – but that’s when she became curious about what the final product would become.

Her dad had a vision for that specific build, and he handed the responsibility to none other than Bert Mantilla at the Chevy Shop in El Monte. He brought it in for a complete restoration, and during that time, Angie became more involved in watching the process and helping decide the color. The father-daughter duo decided to go with the Jewel Blue Poly – the car’s original color. 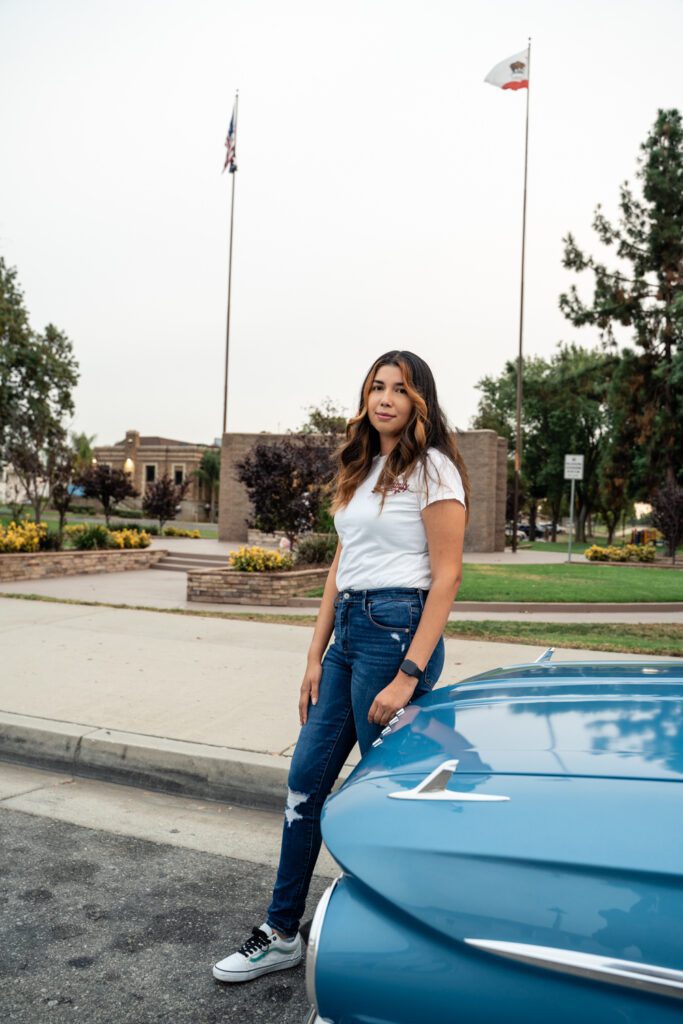 Once complete, Joe’s Upholstery in El Monte gave it new guts while Stereo Super Stores in Whittier neatly tucked in 12- inch Boston G1 Subs in the trunk powered by a GTA-704 amp. For the wheels, they laced up the Bubbletop with a set of 13×7-inch, 50-spoke Truespoke wheels wrapped in 5-20 Premium Sportways.

In all, it took two years to complete the ’61 Bubbletop, and it was then that her dad started to educate her about the history and traditions of lowriding, and that captured her attention – she was hooked. Soon enough, John showed Angie how to maintain the car and remedy any minor maintenance issues that arose. 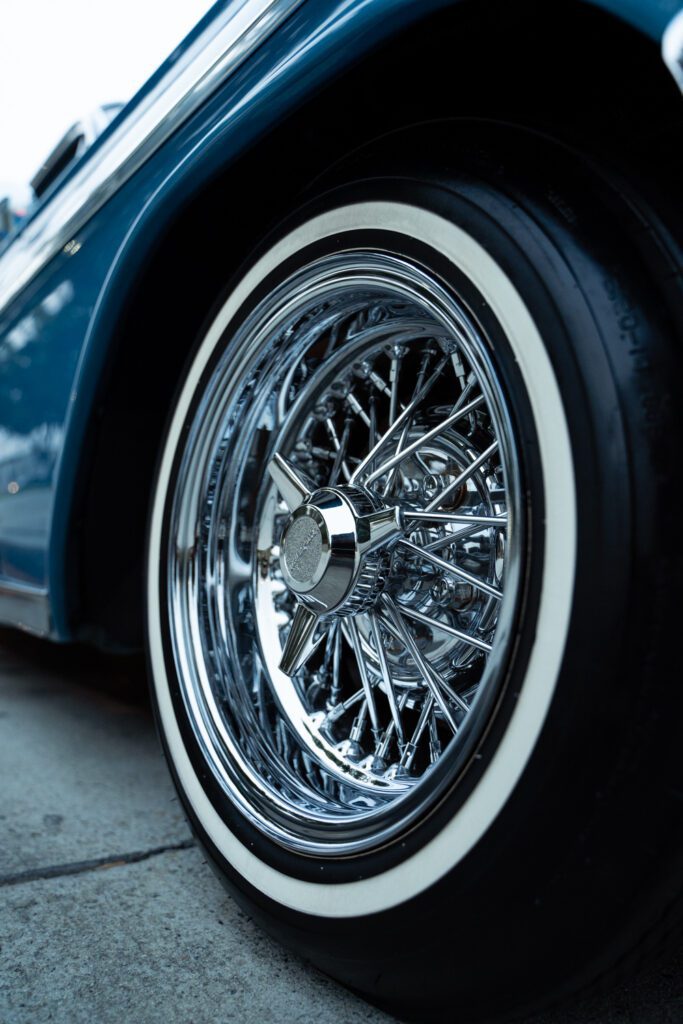 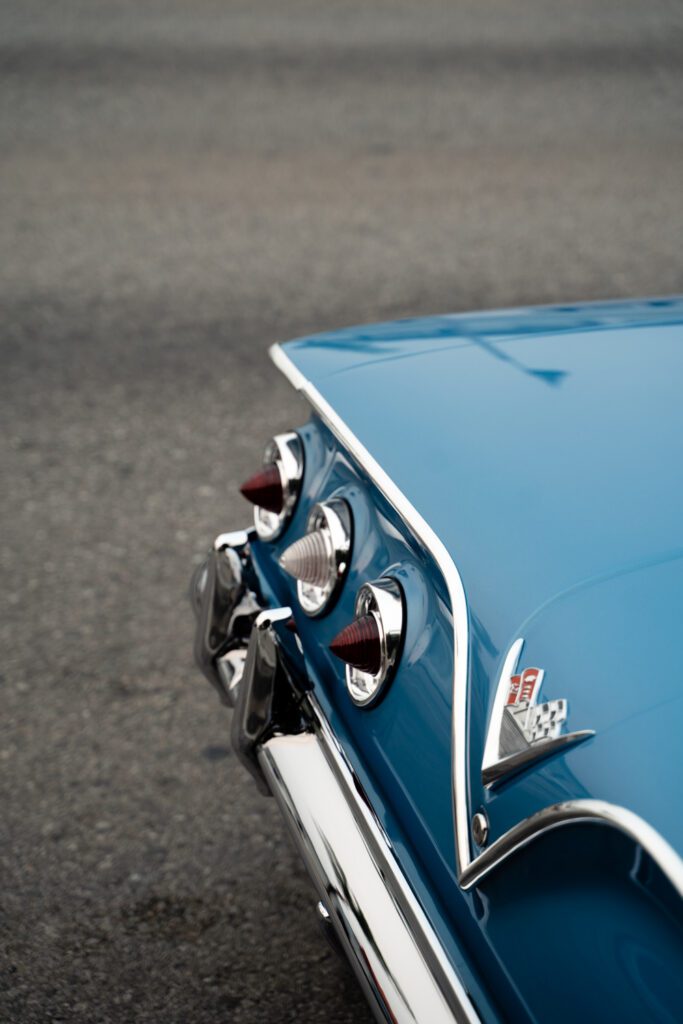 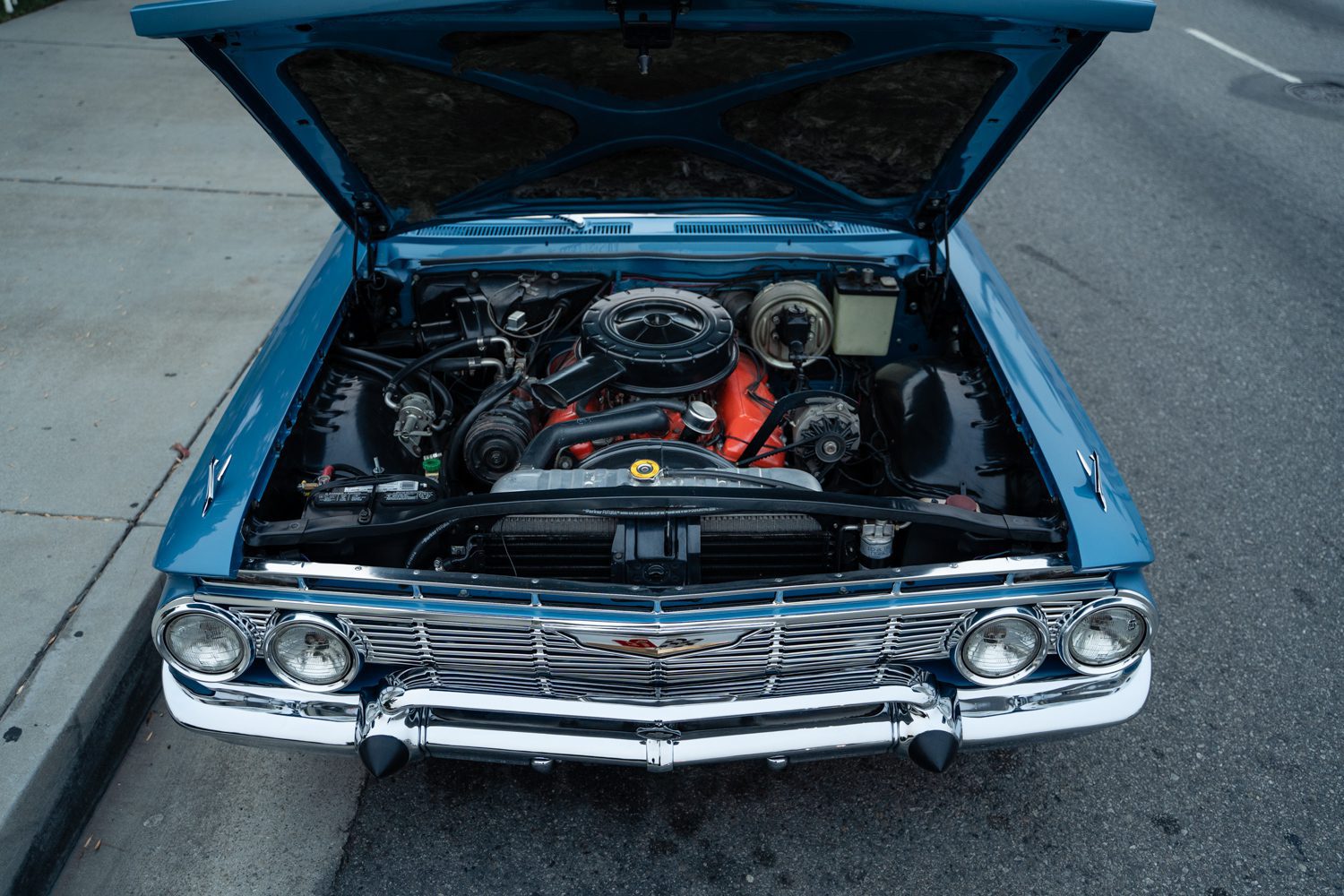 But was the love affair temporary and something that would fade in time? No. She was hooked, and that all came about in 2012 when her dad decided to put the car up for grabs at the 2012 Mecum Auction – of which he still has the sticker on the windshield.

Angie still remembers that day vividly, as does her father. “I didn’t have the strength to stay in the building when it went up. I started to cry because of all the memories of building the car with my dad,” says Angie. And as she reminisced, she added, “The car is a part of our family. It became a sentimental piece.”

When we asked John about the auction, he remembered it all too well. “With the auction already at $88,000, I couldn’t do it. I saw my daughter crying, so I pulled it off the block and forfeited all my fees,” says John. Months later, John would hand the keys to the ’61 to his daughter, and since 2013 she’s been the owner of this incredibly classy build. Since then, Angie has been attending shows with her family and their club “Blvd Family,” According to Angie she wouldn’t have it any other way. “These events are one of the few times a year I get to see all my family. This scene is all about family, and the cars are a bonus.” 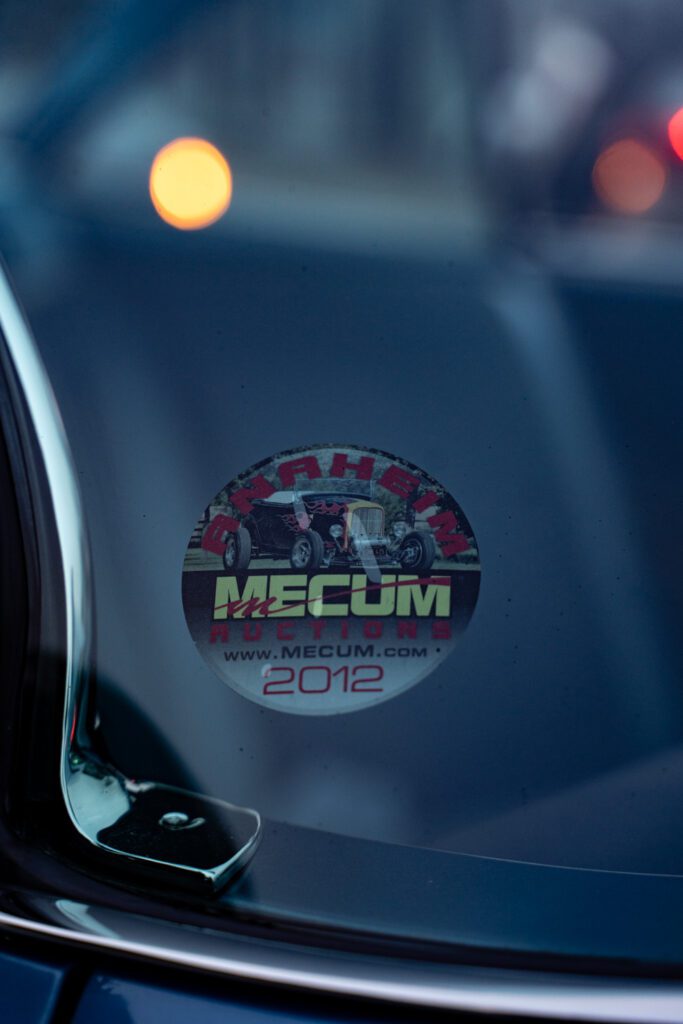 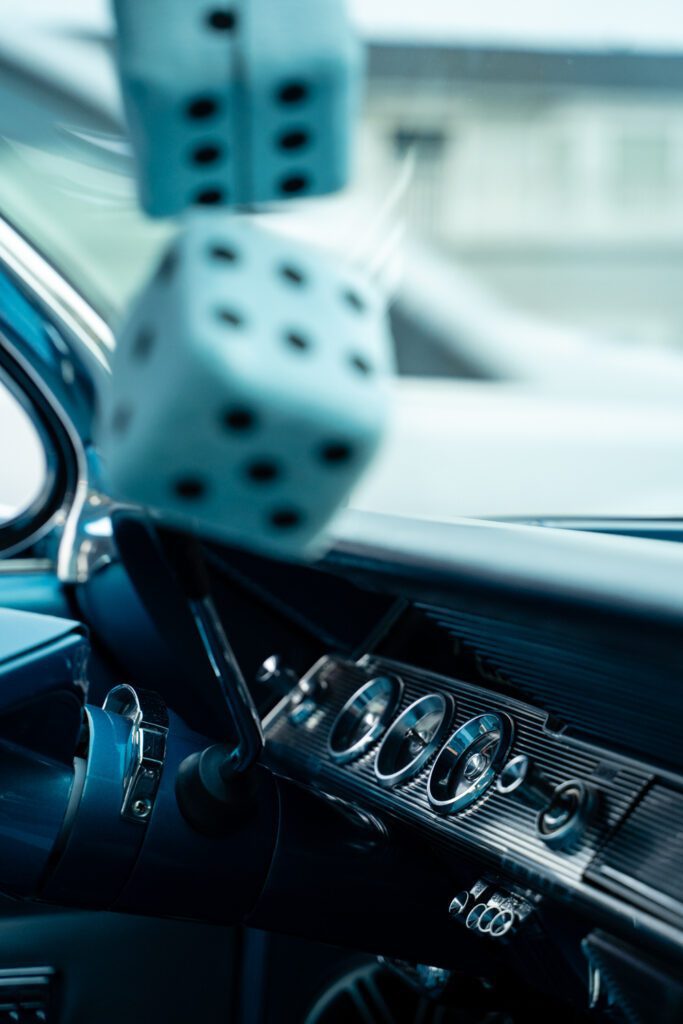 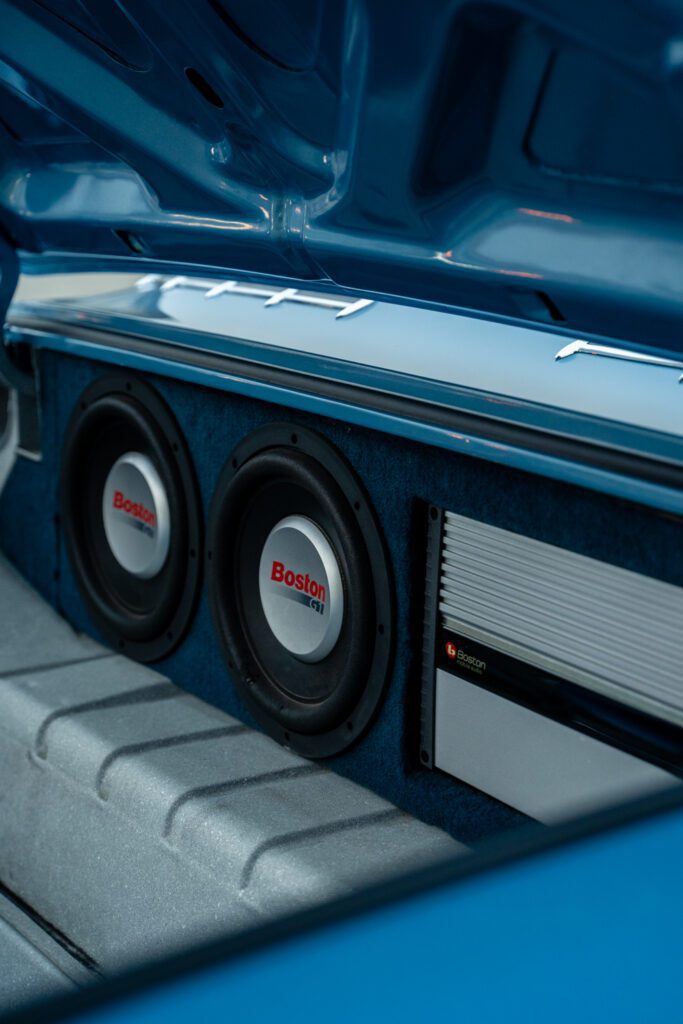 As a female in a male-dominated lifestyle, I asked her what advice she had for other lady riders, and her response was perfect when she said, “No woman should ever feel intimidated in the lowriding scene because there is nothing stronger than a positive mindset. Besides, what is there to be ashamed of? Nothing. So just go for it.”

With absolutely no plans to sell her Impala, lowriding is a huge part of her family’s DNA. She even named her ’61 Impala “Family Jewels” for good reason, and after getting a sneak peak at their personal collection, well, let’s just say it’s definitely a family affair that we’ll be following up on. Stay posted.